Santa Pod Raceway has unveiled an ambitious site development plan conceived and refined over the past 18 months with the award-winning sports venue architects and designers, Driven International

Since opening in 1966 as Europe’s first permanent drag racing venue, Santa Pod’s growth has been ‘organic’ and piecemeal. Now, for the first time, a fully integrated design and construction project will provide Santa Pod’s patrons with a start line area facility unique in the world of drag racing which also will generate extensive new business and heritage benefits for the venue and the community at large.

The project was initiated in 2019 and has evolved to the stage at which it may now be revealed to the public. While the venue continues its battle to confront the encompassing effects of the pandemic, Santa Pod’s management has chosen to announce the project now as a beacon of hope towards a positive future. Further investments will be raised for work to progress once stability is restored.

Driven International adds this Santa Pod project to a UK motorsport portfolio which includes Silverstone Rallycross, Pembrey Circuit modifications and supporting the Bicester Motion development, along with international projects in the USA, Canada, India and Australia.

It has been a wonderful experience working with the Santa Pod Team. Their passion and knowledge of drag racing is unparalleled, which we hope has been captured by our architects into the plans.

We recognise the importance that Santa Pod plays in our UK motorsport and events industry and Driven look forward to continuing to support the development plans.

A vital ingredient of the project – even beyond enhancing the raceday spectator experience – is to develop Santa Pod as a year-round destination, between as well as during events, and for business, enthusiast and casual visitors alike.

The key element will be the new, themed, Santa Pod Cafe which will become an always-open destination, serving as home to the Santa Pod Museum Collection celebrating the twin histories of wartime airfield and raceway. During events The Santa Pod Cafe will be the best seat in the house, with quality menus and a unique viewing experience both inside and on the new 2nd floor outside balcony. 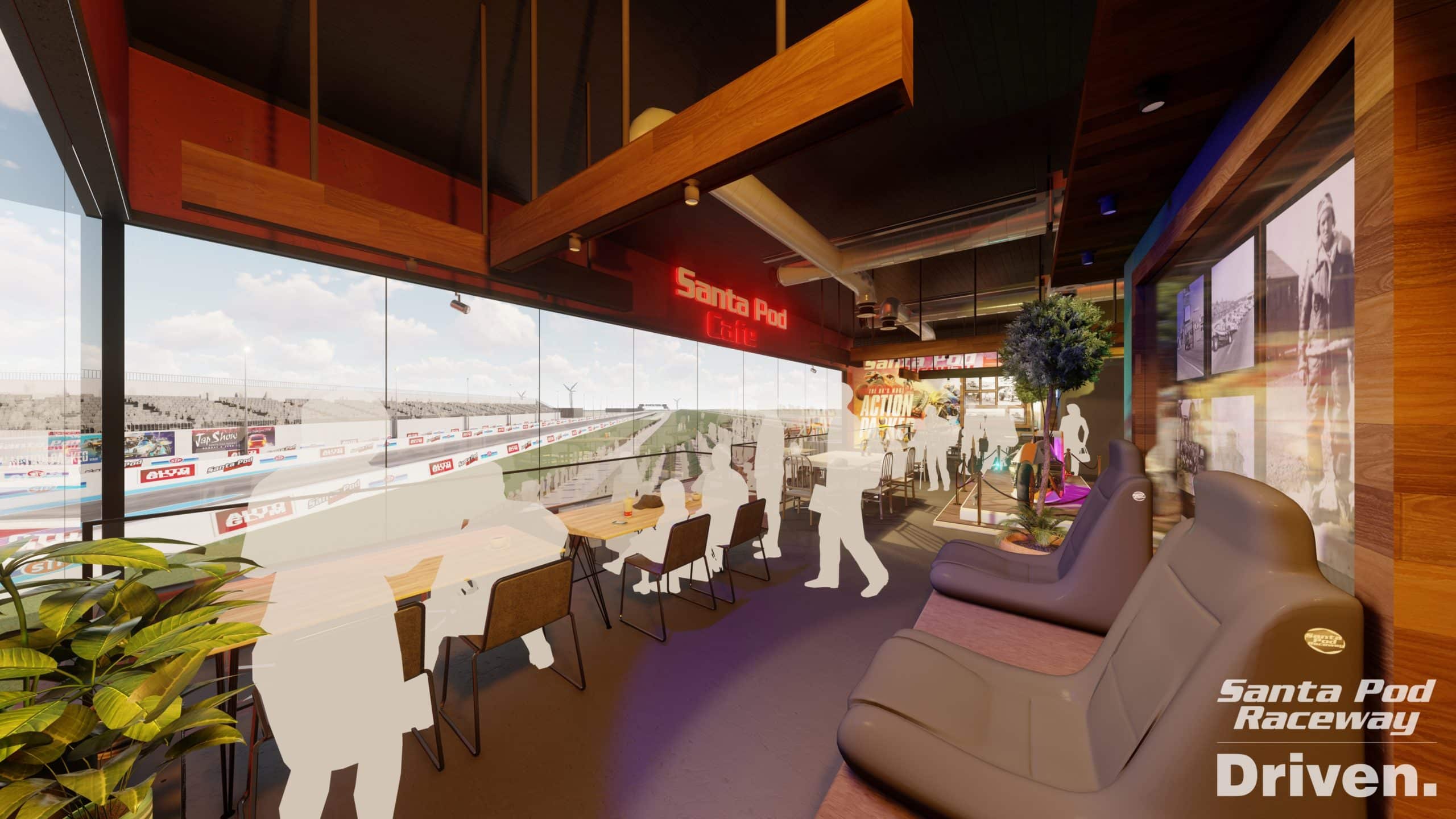 In World War 2, young men came from across America to crew the B17 Flying Fortresses of the US Army Air Force’s 92nd Bombardment Group which flew from Podington aerodrome. Some never returned from their missions; Podington was the last home they would know. Artefacts are already being gathered from home and abroad to commemorate the lives they led and the experiences they encountered here in north Bedfordshire and in the skies over Europe. The display will include materials returned by the Imperial War Museum to their original location.

Alongside, the Café’s growing automotive collection will celebrate more than a half-century of Santa Pod’s drag racing activities, a presentation packed with historic vehicles, images and memorabilia. Not only will this be Europe’s only public collection devoted to drag racing, but the Café’s combination of elements will make it unique in the world.

Driven have designed a new hospitality experience and site development plan for the famous Santa Pod Raceway, the home of British drag racing.

With the new Café at the heart of the development, the plan features an expanded complex of buildings including the Start Line Tower and Fuelers Bar. The Tower will provide enlarged race control, timing and commentary functions on the 1st floor, and new 2nd floor Tower VIP suites with a matchless view of the iconic quarter-mile for racing events, and non-event use. The new Fuelers Bar will be a bigger and better version of this integral part of the Santa Pod experience, featuring a mezzanine-floor viewing area and exhibits from the Santa Pod Museum Collection.

Full information on Santa Pod Raceway’s activities and operations, including its 2021 event calendar, may be found at santapod.co.uk

Santa Pod Raceway opened in 1966 as Europe’s first permanent drag racing venue, located on a former World War 2 airfield – ‘Santa’ to evoke Southern California, the cradle of drag racing; ‘Pod’ for Podington, the name of the airfield and nearby village. The venue holds a 365-day operating licence and, in normal times, hosts more than 70 events a year over most weekends from February to October and occasionally mid-week. The calendar includes major spectator events such as two FIA/FIM European Drag Racing Championship rounds and the renowned mid-summer Volkswagen festival, Bug Jam, along with national drag races, modified car shows, specialist and family events, and public track days known as ‘Run What Ya Brungs’.

In 2020, Santa Pod developed Covid-19 protocols which allowed it to stage reduced-scale events in front of limited, socially-distanced audiences.

Santa Pod Raceway is located on the Bedfordshire-Northamptonshire border near Wellingborough, NN29 7XA. For further information, visit santapod.co.uk or telephone 01234 782828.