Ontario gears up to become home to Oro Station

This article was originally written and published by The Globe and Mail, by Matt Bubbers. You can view the original article by clicking here.

It takes a wild imagination to envision Oro Station, a new racetrack, luxury car club and automotive industry hub being built in Oro Medonte, Ontario. Not only is that because it’s an ambitious development the likes of which doesn’t exist in Canada – nor, perhaps, in the world – but also because on this day in early August, the site is little more than 200-acres of grassy, overgrown farmland.

Driving an off-road buggy that’s kicking up a thick plume of dirt while bouncing across what will, eventually, become the racetrack’s pit-lane, is Geoffrey Campbell, managing partner of Oro Station. He must be doing nearly 100 km/h. 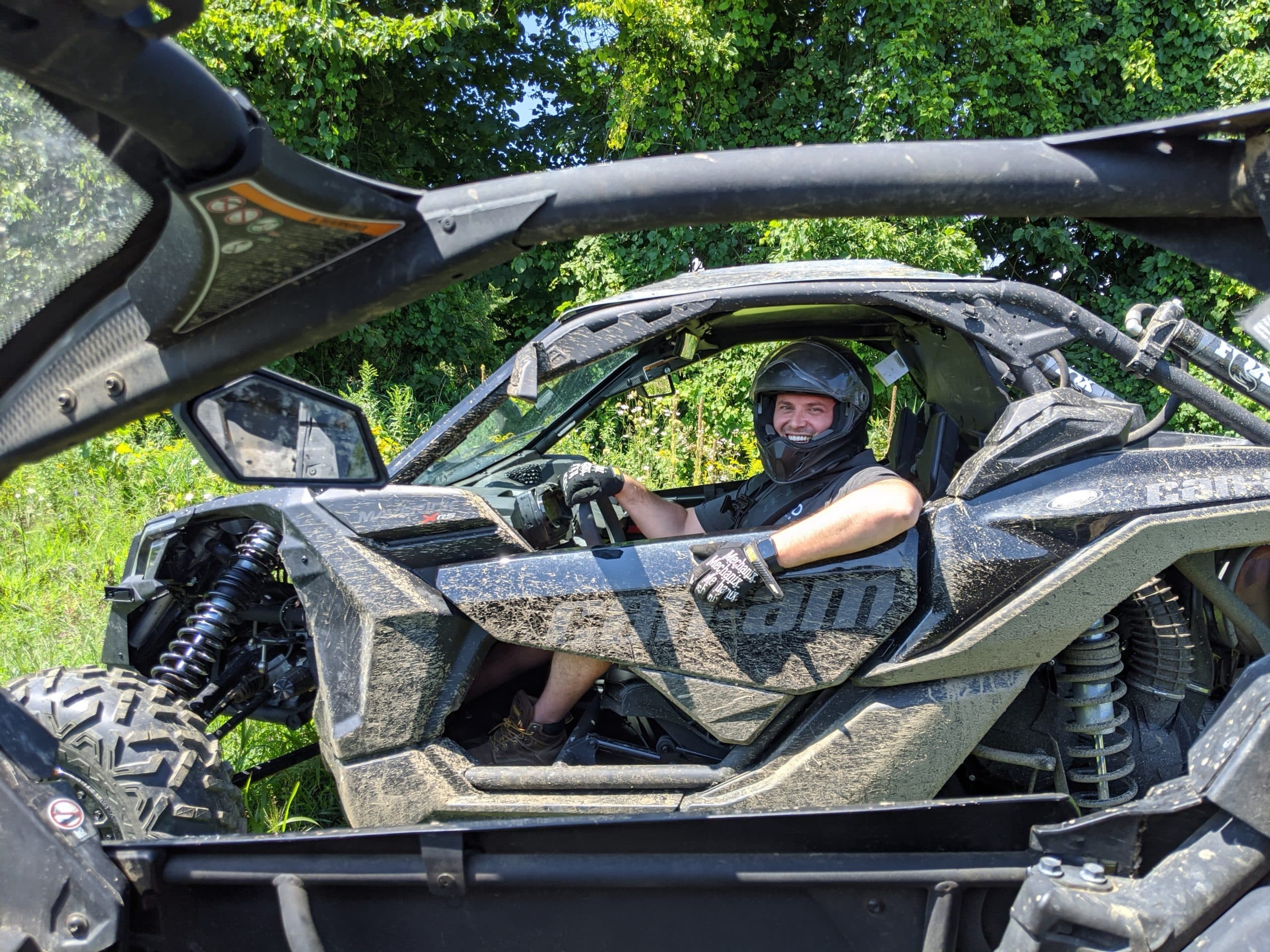 Campbell is a developer, Managing Partner at Oakleigh Developments, but he’s also a car fanatic and Oro Station is his baby. It’s something he’s been thinking about for 10 years. Now it’s starting to become real.

Campbell leans out of his buggy and points out where the main boulevard and pit building will be. ‘Imagine walking through this facility,’ he says. ‘You’ve got a museum sitting here, you stopped by the cafe for coffee, the garage doors are open here where they’re working on a bunch of vintage Mustangs,’ he says. Around the corner could be an autonomous car prototype in development, and down the road Porsche or BMW might be hosting a track day for prospective customers.’

Campbell’s imagination is certainly powerful, but it’s a compelling vision and something that’s probably overdue in Ontario.

Premier Doug Ford attended the groundbreaking ceremony for Oro Station on August 20, along representatives from local, provincial and federal governments.

‘There’s no reason why we can’t make our province the top destination for auto innovation and this project will help us maintain our position as leaders in the sector across North America,’ Premier Ford said. 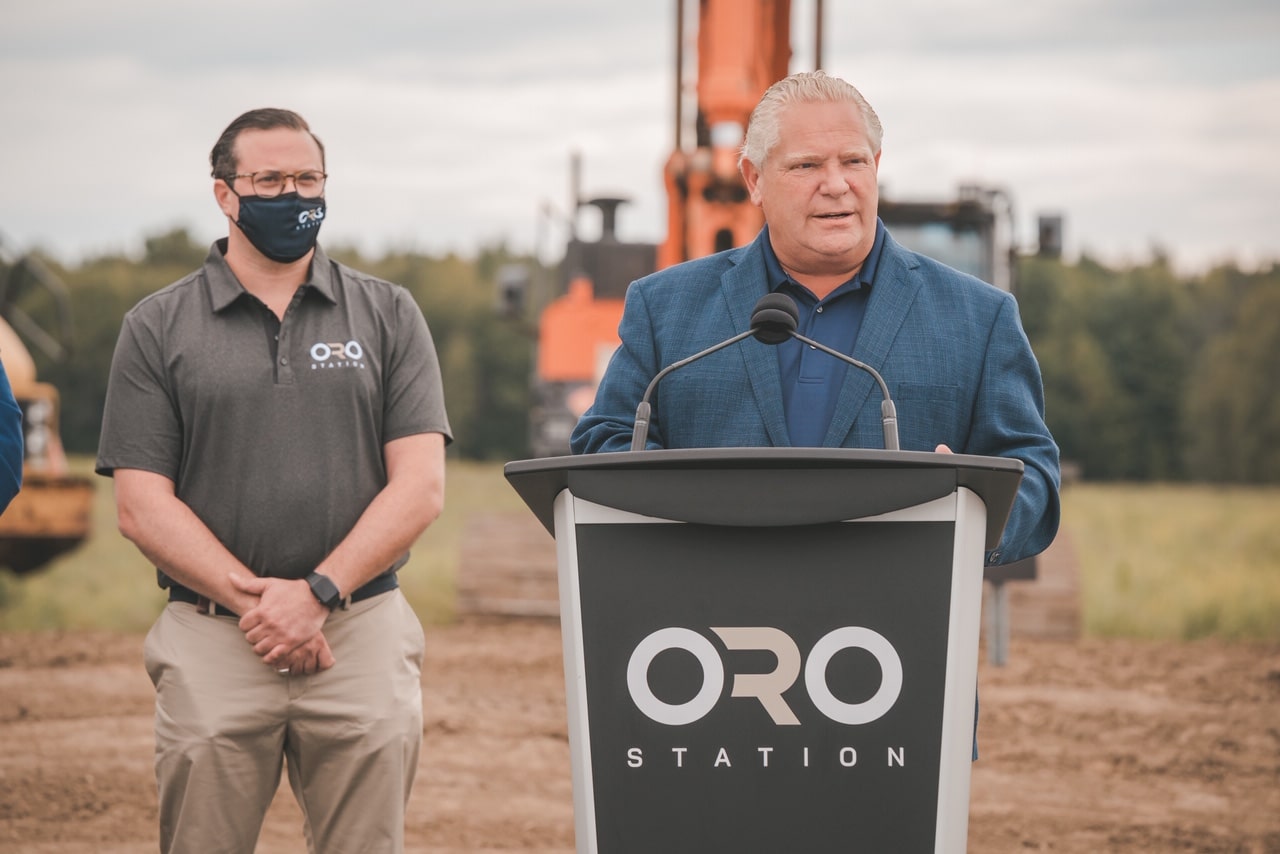 The 216 acre site is located between Barrie and Orillia, and will create 700 jobs, with roughly 300 on-site, according to an economic impact analysis commissioned by the developers. The project’s groundbreaking comes at a critical time for the province’s auto industry, which is dependent on auto makers investing here to develop and produce electric and automated cars.

What makes Oro Station unusual and unique is its vast range of intended uses; something like Disneyland meets Silicon Valley for all things automotive. It bills itself as ‘Ontario’s destination for the racers and restorers, the educators and innovators, the enthusiasts and entrepreneurs.’ Campbell frequently mentions ‘community building’ and ‘education.’

The site is approximately one hour north of Toronto, or maybe two hours in long-weekend traffic. The Lake Simcoe Regional Airport is across the street, so well-heeled track goers could fly in from anywhere in the U.S. or Canada, skipping traffic entirely. 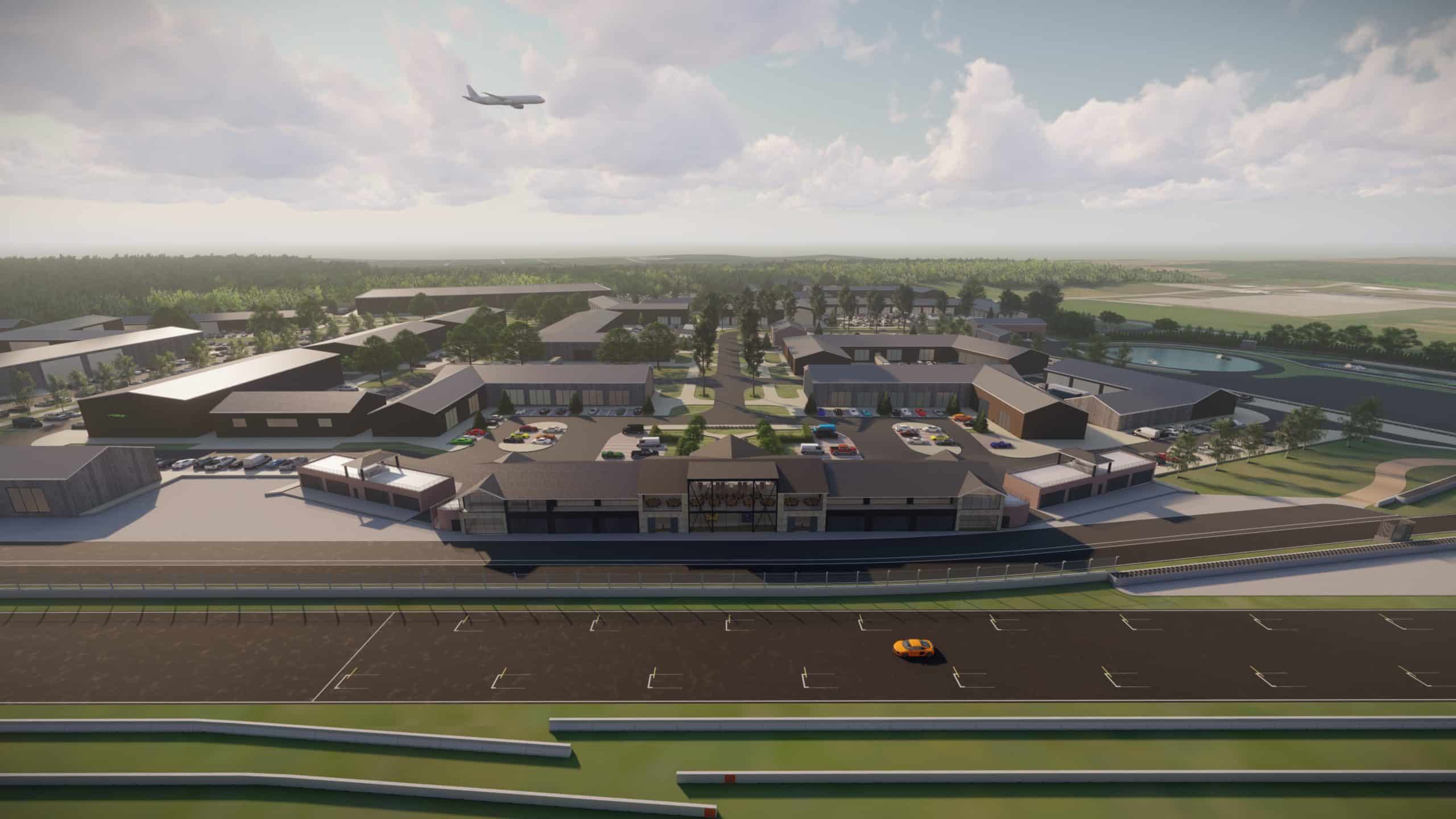 The track itself will be 4.1 kilometres long and designed for modern GT and vintage racing cars; ex-Formula 1 driver Karun Chandhok has been driving laps in a simulator, helping to refine the circuit’s layout.

Kinrara Consulting, the firm behind the U.K.‘s spectacular Goodwood Festival of Speed, will help to organize events.

On north side of Oro Station will be the home of the Bexley Motor Club – something like a country club but full of people who aren’t annoyed by noisy cars but actually like them. There will be barn-style garages for stashing your classic cars and town houses so you can stay the weekend. A membership will cost around $100,000 for the initiation fee, Campbell says, adding that it’s about what you’d pay for a new set of wheels on a Bugatti Chiron. To buy a trackside ‘pied-à-terre’ will cost over a million dollars.

Private racetracks thrive near New York, Vancouver, L.A., and across Europe. Perhaps the only real surprise is that there isn’t already a place like this in Greater Toronto Area given the explosion of new wealth in recent years. In 2017, McLaren Toronto sold more McLarens than any other dealership in the world. In 2018, an enormous new Lamborghini, Rolls-Royce and Bentley dealership opened to keep up with booming demand.

“The minute anyone saw these barns [at the Bexley Motor Club] we got requests for up to 50 of them,” Campbell says. One customer wanted three, each with a helipad.

But, he stresses this won’t just be another gated playground for the ultra-rich. This exclusive car club is only half of Oro Station.

At the south end of the property is 500,000 square feet of industrial and event space that will host everything from research and development facilities for auto makers, suppliers and startups, to artisanal classic car restoration shops, to museums and restaurants and courtyards open to the public for car shows and events. Georgian College has partnered with Oro Station to expand its automotive and high-tech academic programs. 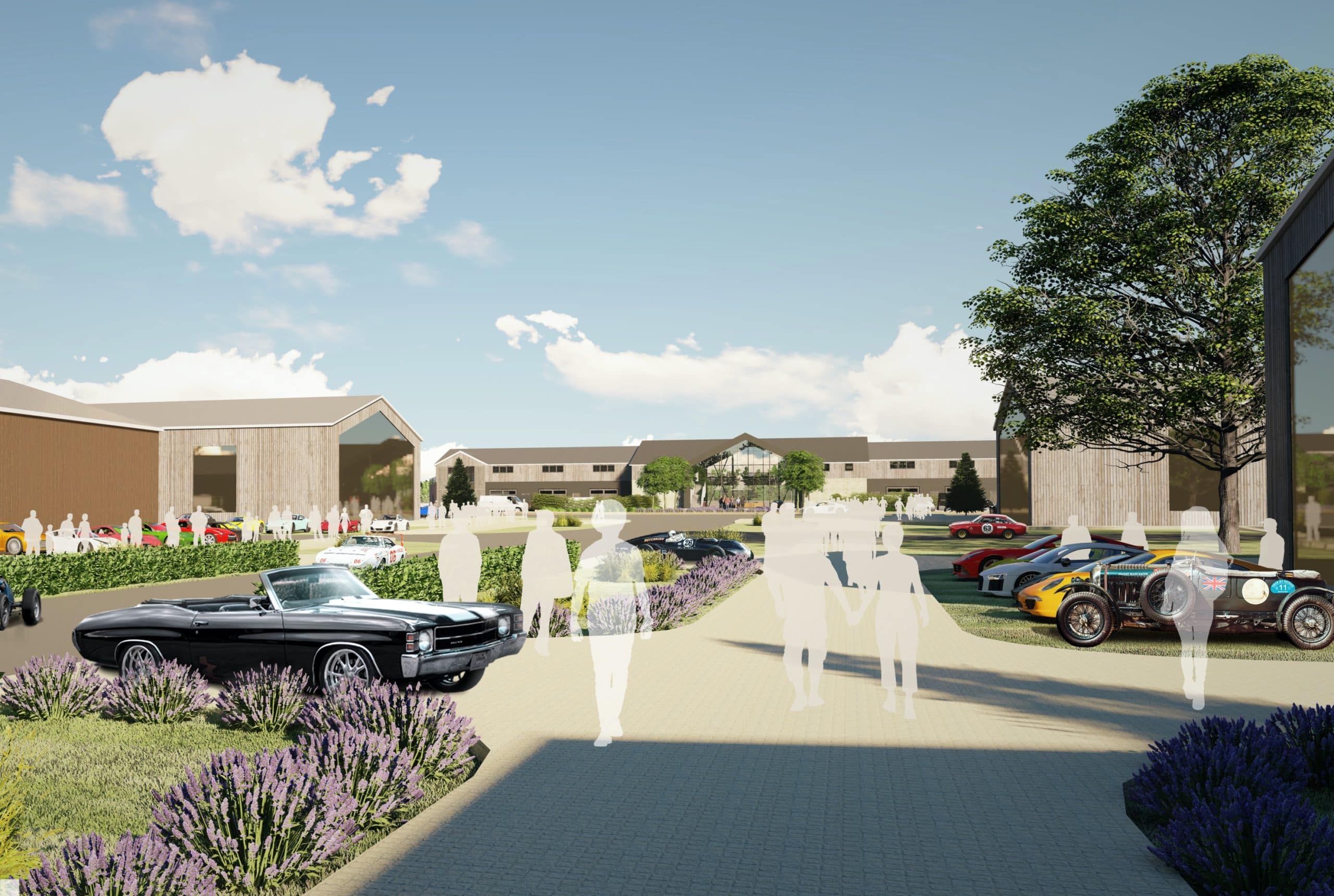 It won’t be quite like Goodwood; the public events will be much smaller and the circuit isn’t designed for spectators. Nevertheless, if it’s as advertised, a hub like this could help put Ontario on the car-culture map – not just the sales and manufacturing charts.

‘What we’re trying to create is an ecosystem and environment that is geared around the passion in automotive,’ says Campbell.

If this all sounds like a lot, it is; what it becomes in reality will depend on the tenants and businesses it can attract. Ambitious racetrack projects have come and gone in Ontario before. Campbell is used to people being sceptical.

‘We’re now zoned, and that’s the biggest hurdle,’ he says, leafing through a huge stack of detailed engineering drawings for the circuit. There is already approximately $10 million into this $150 million development. Formal agreements with tenants are in the works now.

With any luck, by this time in 2022, it won’t be off-road buggies but cars – hydrogen ones, electric ones, prototypes, exotics and classics – all speeding down the pit straight.

Oro Station will become the ultimate destination for automotive enthusiasts and innovators, with a new 200 acre multi-use Innovation Park in Ontario.